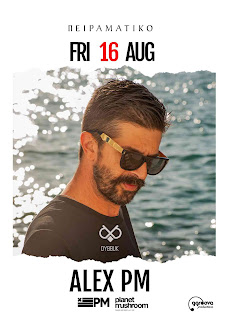 Greek DJ and producer, Alex PM’s career heralds back to 1986 where he had his first residency in a small underground club called “Barbados” in Athens.
In 1990 he moved his residency to the infamous “Wild Rose” club where his unique and eclectic sound could only be described as a fusion of soul, funk, rock and house.
Aside from his musical career, Alex was a fervent fashion enthusiast, always fascinated by current trends in fabric. It was this passion and thirst for music that inspired him to open his own shop called “Vicious Circle”, selling fashion and merchandise and vinyl for the local dj scene.
Not long after his shop became successful, he moved to Paros Island where he opened more shops under the brand name “Planet Mushroom”.
During the same time he took on residencies in Athenian club scene such as
+Soda and Bossa Nostra.
Alex has continued to DJ, operate his successful business and organize his summer event “We Love Thursdays” at Linardo (Paros) as well as having a residency since 2011 at Athen’s hot spot “Dybbuk”.
To compliment all this, he recently ventured into the studio with long- time friend Werner Niedermeier to collaborate on some exciting new music. The duo will have some releases this year on Bulletdodge Records (UK) and Tulipa Recordings (USA) and more in the pipeline. Alex is also working on productions with the Accismus crew, also from Paros.
ShareTweetShareShareSendSend