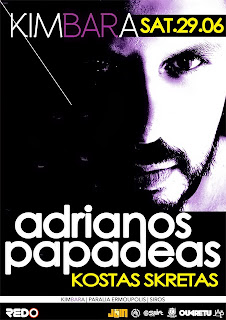 Few words about Adrianos Papadeas A

www.AdrianosPapadeas.com
www.twitter.com/AdrianoPapadeas
www.Soundcloud.com/Adrianos-Papadeas
Biography
Adrianos Papadeas started his musical journey, in 1992 as a dj in local clubs of the island Spetses where he was born and later in Paros. He decided to take his love for deejaying one step further so he moved to Athens and began his studies in musical technology while he was working as a dj and sound engineer in radio stations.
In 2005 he’s doing his debut as a radio producer in Best Radio 92,6 where he finally has the chance to present his musical selections to a wider and musically educated audience. He soon becomes known for the melodic yet underground sound of his radio shows and his popularity begins to expand to a larger crowd from all the spectrum of electronic music.
In 2007 he joins the crew of the record label The Sound Of everything as a compiler and event organizer. In the summer of the same year he releases his first compilation under the title Concealed Truth. The success of the compilation exceeded all expectations and established him as one of the most popular radio producers and djs in Greece.
In October 2008 Adrianos releases his second compilation, Concealed Truth 2, which instantly became a best seller in dance music in Greece and proved beyond doubt that his success is anything but circumstantial.
In June 2009, Adrianos was voted from the audience as one of the top 5 djs in Greece in the contest Best DJ Awards.
In June 2010 he releases the third and the last compilation of Concealed Truth 3 which became also a best seller like Concealed Truth 1 and 2.
Parallel, he is working on his own productions and remixes for the The Sound Of Everything and Swift Records.
You can get a flavour of his musical taste in Best Radio 92,6 every Saturday and Sunday at 10 pm.
Few words about Kostas Skretas
Kostas Skretas was born in 1984 at the city of Athens(Greece) and grew up in Syros, an island of Cyclades until the age of 17. He studied Electronic Engineering at the city of Lamia(GR) till the age of 23 and then he returned back to Syros(GR) to finish his military duties at Hellenic Navy. He started playing the piano in a very young age, but soon he realized that his music interests went far away from just classical melodies! In 2001, after a few years of collecting music he started playing music at local bars and clubs in Syros. Experimenting in various music he understood that progressive house music was closer to his likes. Releases of Kostas have been supported by artists like Hernan Cattaneo(ARG) , Eelke Kleijn(NL), Shiloh, Flash Brothers, Christian Cambas(GR), V-Sag(GR), Adrianos Papadeas(GR), Denis A, Eelke Kleijn, Nick Varon and Cid Inc. just to name a few. These days he is really busy producing and organizing events along friends under the name of DeepGroove Music Arts TM.
Releases
Kostas Skretas – Blur Dreams (Original mix) (Bit Records Mexico)
Kostas Skretas – Blur Dreams (Christos Fourkis Remix) (Bit Records Mexico)
Kostas Skretas – Tears On the Leaf EP (Inc Lank, Claes Rosen, Aeron Aether, David Kassi and Matt Rowan Remixes) (Dark Pleasure Rec.)
Kostas Skretas – Tears on the Leaf (Remixes EP) (Inc. Ben Coda, Sezer Uysal, Michael & Levan and Stiven Rivic , Mahos Paterakis Remix) Dark Pleasure Rec.
Christos Fourkis – Dust in the wind (Kostas Skretas Remix) Dark Pleasure Rec
Danny Terrazza – Deeper Fields (Kostas Skretas Remix) Dark Pleasure Rec
Sezer Uysal – Fall in Love in Moscow (Kostas Skretas Remix) (Baroque Rec.)
Kostas Skretas – Summer Star (Inc. Max Demand, Chris Domingo Remixes)(The Sound Of Everything)
Forthcoming
Kostas Skretas – Night Call (inc George Delkos Remix) TBA
Bobby Deep & Venes – What Kind of love (Kostas Skretas & Sergi Only that love we can give Remix)
Appearances
Kostas Skretas – Summer Star (Max Demand Deep in love remix) (Adrianos Papadeas – Concealed truth Vol. 3)
ShareTweetShareSendSend