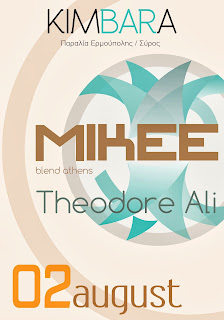 Το δίδυμο Mikee (Blend Athens) w/Theodore Ali σε ένα party που θα σας ξεσηκώσει.
Παρασκευή 2/8 στο KIMBARA BAR
Παραλία Ερμούπολης
Έναρξη 23:00
Mikee’s bio
In Music I trust
Going back to 1993 Mikee began his musical journey into DJing as a resident DJ at Factory Club in Athens. Inspired from Detroit underground techno sounds and afro beats, combined with his wide music knowledge he created a unique tribal techno style of his own which made him push his sound a little bit more to the diverse techno DJ sets everyone now recognizes In the underground scene of Athens.
Mikee quickly started to promote his own Club nights in Athens along with his partner Lorenzo and in a short period of time ëqbaseí nights became the most famous and prestigious Club nights in town. Until now Qbase has managed to stay at top nights in Athens with international bookings of the most high-profile DJs and producers from Europe and US.
In mid 2001 he had the chance to write the music for a theatrical play in Athens. He joined the “Theater of the South” and wrote the entire music for the show ìGod is a DJ” by the German author Falk Richter. In 2009 he had the opportunity to write the music for another one theatrical play, collaborating this time with the theatrical group ëOPERAí and wrote the music for Moliereís ëMISANTHROPEí.
On summer 2012 Mikee start his collaboration with Aquaradio.gr as a radio producer with an 2 hour live broadcasting show.
Mikee has also managed to create tracks as unique as his DJ sets developing a sound, combining the hard edges of the underground with the groovy and intelligent beats of Detroit techno. He combined forces with many names of the techno scene of Greece, like Mikael Delta, DJ Stefan and DJ Savage. He released an EP with DJ Savage at Kinetik Records Greece under the name S&M Project, number of tracks were included to several Greek CD compilations, 8 mixed CD DJ sets called technoforms for greek music magazines, and a release on September 2006 under the name Mike Harris (with Mihalis Safras) called ‘Blending Rhythms EP’, on Funktion Records (Funktion 007), France.
Mikeeís future is looking forward and promising as he is entirely focused in his studio work. Production-wise , his style is stripped down flavored and during 2013 the freeshiest tunes by MIkee will be out on Material, Mr Carter, King Street, Kinetika, Aztec Tribalism and the hype doesn’t stop here…
For him the top peak of his DJ career was the invitation of Londonís most famous underground club Fabric along with top class DJs and producers. Since then he has been a resident DJ at various Clubs including U-matic and on Blend and Qbase events. This season Mikee is appearing again as the resident DJ at Blend club and events, as well as at QBASE events in numerous clubs in Greece and abroad.
Releases
S&M Project (aka Mikee & DJ Savage) – Northern South EP [kin 017]
Mihalis Safras & Mike Harris (aka Mikee) – Blending Rhythms Ep [funktion 07]
Pach DJ – Global Apocalypse (Mikee’s Solito remix) [sk 185]
Mikee – Confused EP [mrcarter 05]
Mikee – Wrong House [Maya 089]
Various – Deep In Tech Sampler Ep [kng 431]
Mikee – Techniques Ep [AR 016]
Mikee – Between The Lines [InFact 034]
Various – Summer Season, Vol.1 [AR 022]
Mikee – Infection Ep [out Aug 19, 2013 on Kinetika records]
Mikee – I Fall EP [out Aug 5, 2013 on King Street]
Many more productions are scheduled to be released until the end of 2013.
http://www.beatport.com/artist/mikee-athens/289983
http://www.discogs.com/artist/Mikee?anv=Mikee+%28Athens%29
Mikeeís breakthrough in the Underground through the years:
ShareTweetShareSendSend