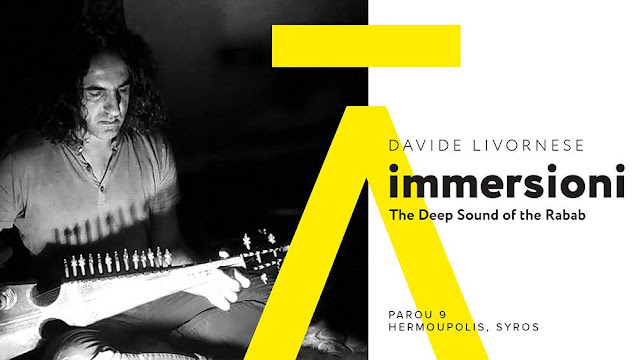 Plastico Cafè-Gallery invites you on a unique journey to the land of Afghanistan, immersing ourselves in the deep sound of the Rabab.
On Wednesday 18th December at 8 pm, the Italian musician, polystrumentalist and composer, Davide Livornese, will play a beautiful selection of his original compositions and melodies of the Middle East, each with its own unique culture and style of music.
The grand feeling you get from listening to the Rabab is something to be experienced in a relaxing and meditative atmosphere of Plastico, to connect the mind with the soul.

Davide Livornese was born in Sicily. At a very young age, he explored the expressive possibilities of guitar and voice.
He played in various bands before moving to Florence where he began studying classical guitar, harmony and lyrical song.
He also started a theatrical journey as an actor and composer which brought him to become conscious of the body as an instrument.
Soon after, he moved to Milan where he played in an avant-garde ensemble and founded an experimental rock band.
He currently lives in Greece, between Athens and Crete, where he continues his research studying ottoman, traditional music and the Afghanistan rabab under the guide of teachers like Daud Khan Sadozai and Ross Daly.
He is also the art director of the acclaimed festival “Labyrinth Italia” which every year attracts big artists and musicians like Ross Daly, Kelly Thoma, Daud Khan Sadozai and many others.
You can follow and watch Davide’s performance on his YouTube Channel.

Also known as “the lion of the instruments”, the Rabab is the Afghanistan lute. It is a very ancient instrument and the ancestor of the Indian Sarod.
The Rabab is mentioned in important Persian poems. It is called “the paintbrush of the mind and soul”: a tool that could paint the many colours of emotions within us. An instrument created to be the shadow of the ‘hymns’ that came through the creator.
ShareTweetShareSendSend